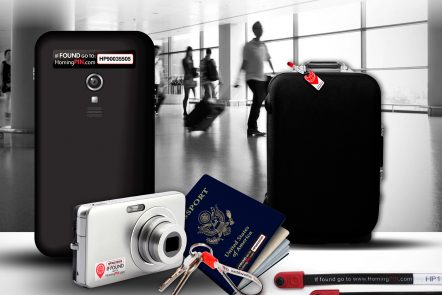 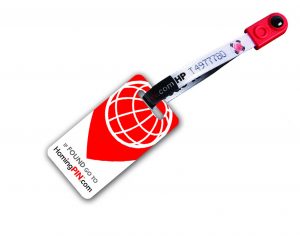 Cell phones have become the one accessory we cannot live without – from answering emails, to contacting friends, or catching up on the news, we literally use them all day long. That sense of dread that kicks in when you get to work and realise you left your phone at home often leaves people feeling “lost” – a sign that we cannot imagine live without our phones! But what happens when you lose your phone in a bar, restaurant, or in a taxi or public place?

The chances of recovering a lost phone are slim. It is believed that only around 2% of cell phones that get left in public transport vehicles (busses, trains, etc.) are reunited with their owners. Not only is it very costly to replace a cell phone, but the hassle of losing valuable contacts, photos and information if your phone is not backed up, is an even more daunting thought. So what can be done to avoid this?

Keys, mobile phones, cameras, i-pads, laptops, passports and wallets can all be a nightmare when mislaid. Yet, when they arrive at a lost-property office or police station, only approximately 25% are returned to the owner because there is no simple way to track them down. After less than a month, the 75% of items that are unclaimed are usually auctioned.

Up to 20 million bags are mislaid in airports every year, and in London alone, 50 000 mobile phones get left behind in taxis annually. South Africa is no different, with thousands of personal belongings making its way into Lost & Found containers nationwide every year. Cell phones are one of the most commonly misplaced items, and are seldom reunited with their owners. HomingPIN offers an innovative solution to this global problem with the HomingPIN tag. 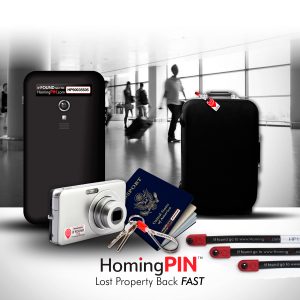 HomingPIN offers baggage loops with tags, key rings and stickers that have a unique identification number on them. This number gets activated online prior to using the tag, and is linked to the owner’s email address and cellphone number. If someone finds a cellphone, keys, baggage, or any other item that has a HomingPIN tag on it, they can easily notify the owner by visiting www.homingpin.com and entering the unique identification number, as well as their contact details. The owner is immediately notified via SMS and email, and is able to contact the founder to retrieve their belongings. Finders are not given the owner’s contact details, however, so it is up to the owner to make contact first.

Imagine the peace of mind knowing that your lost cell phone needn’t be lost forever!

HomingPIN is integrated with the worldwide World Tracer system, which all baggage handlers have access to. For airlines, HomingPIN will instantly provide information on the bag’s whereabouts when it is found. The airline will then contact the owner to arrange transfer of the goods. What’s more, is that HomingPIN can provide reasonably-priced transportation of your found goods, from anywhere in the world. Because HomingPIN works internationally, your phone will be protected anywhere around the world.

HomingPIN tags, stickers and key rings allow you to tag a variety of items including, but not limited to, luggage, laptop computers, mobile phones, keys, wallets and passports. Easy-to-use and practical, they’re a life-saver for the whole family. With this handy tool, cell phones have a much better chance of being returned to their owners, and owners have peace of mind too!