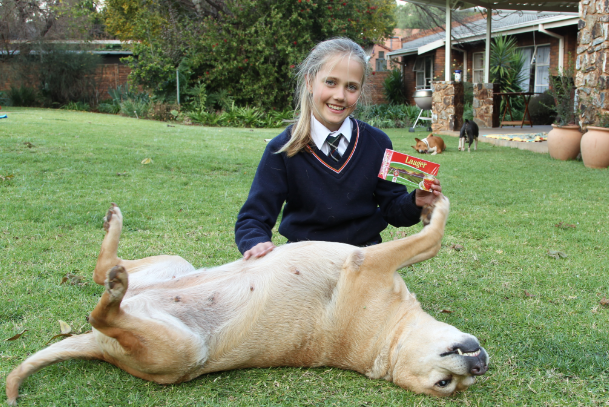 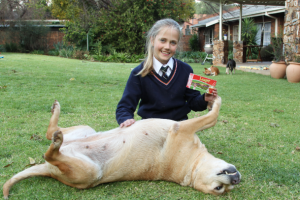 Zaria Rule – a grade 7 learner from Cornwall Hill College in Centurion tested green rooibos tea on several diabetic dogs, including her pet dog, Jessie, as part of a school science project, which led to some extraordinary findings.

Since Jessie (9) was diagnosed with diabetes in 2015, her energy levels had been low and she preferred to sleep her days away rather than to play. One afternoon, following a radio interview she had heard about the benefits that rooibos could offer diabetics, Zaria decided that she wanted to test rooibos tea on Jesse, and that this would make the perfect topic for her school science project.

Zaria needed no further encouragement and proceeded to put it to the test. She then fed Jesse and 3 other diabetic dogs – whose owners volunteered to participate in the project – one cup (250ml) of green rooibos, which was diluted with another three cups of tap water per day over a four-week period.  None of the dogs were forced to drink the preparation, but they all seemed to enjoy the taste and often their drinking bowls were refreshed twice a day. She specifically used green rooibos since previous studies found that it was the most effective extract in lowering raised blood glucose levels in diabetic rats.

“During the research period, Jesse and the other dogs continued with their diabetic medication as prescribed by the vet in order to assess the impact that the one variable factor – being rooibos – would have on the dogs. After about four weeks of rooibos supplementation, Jesse responded so well that we were able to reduce her dose of insulin treatment down to 10 units twice a day, which was the lowest dose we’ve ever given her since being diagnosed a year earlier.

“Prior to adding rooibos to Jesse’s diet, her blood sugar levels were very low – almost to the point where she was hypoglycaemic. When we first started supplementing with rooibos her blood sugar levels were all over the place, but much to my delight, by the end of the four weeks they were more stable than ever. She was her old self again and had an abundance of energy. The other dogs responded in a similar way, which was such positive news.”

Since then green rooibos has become a firm favourite of Jesse’s, and Zaria tries to give her a cup as often as she can. Zaria would love to continue her research over a longer period and with more dogs in order to reach more conclusive findings, but is limited by the costs and the availability of a blood test that can conclusively prove the effects of the rooibos tea.

Her mom, Caroline says some dog-owners probably view it as a crazy idea and might not have the energy or discipline to adhere to the daily feeds and testing, but what if the end result is successful?

“If supplementing with green rooibos could reduce the amount of insulin that a diabetic dog would require, it would not only save dog-owners high medicine costs, but their dogs would experience fewer side-effects too. Rooibos is a natural, healthy and much more affordable product to give pets,” she says.

Several studies by the SA Medical Research Council (SAMRC), the Agricultural Research Council (ARC, Infruitec-Nietvoorbij, Stellenbosch) and the Tokyo University of Agriculture and Technology, have all confirmed rooibos’ potential to delay and possibly prevent the onset and progression of type 2 diabetes (T2D) in diabetic rodents, so it’s no surprise that Jesse responded so well to the treatment.

Zaria’s project also helped to create awareness among the community that diabetes also affects dogs and that the early detection of the condition can save and significantly improve the quality of their lives. The exact cause of diabetes is unknown, but the most common form of the condition in dogs is type 1 – insulin-dependent diabetes, which occurs when the pancreas is incapable of producing or secreting adequate levels of insulin. Whereas in cats, type 2 diabetes is more prevalent and is the result of a lack of normal response to insulin.

Symptoms to look out for include a change in appetite, increased thirst and urination, weight-loss, lethargy, vomiting, a change in dog odour, ongoing urinary tract infections, cataract formation and chronic skin infections, among others.

Nireshni Chellan, Senior Scientist at the SAMRC who has been studying the effects of rooibos on diabetes for several years, cites aspalathin – a rare antioxidant – found only in the rooibos plant – as one of the critical bioflavanoids that contributes to rooibos’ anti-diabetic properties.

“Aspalathin helps muscle cells to use glucose more effectively and therefore may help to maintain normal blood sugar levels. Rooibos has also been proven to protect against oxidative stress in diabetic rodents, particularly in the heart,” she explains.

“One of the greatest benefits of green rooibos is its high antioxidant potential, which improves heart and liver functioning. It also contains no caffeine or tannins (caffeine is a big no-no for pets, as dogs and cats appear to be more sensitive to the effects of caffeine than people). Rooibos also contains cancer-fighting flavonoids such as quercetin and luteolin,” says Chellan.

In addition to rooibos’ anti-diabetic properties, it can also be used in a myriad of ways to improve the overall health and well-being of cats and dogs.

According to the SA Rooibos Council it can be used to treat pet allergies, itching and dry skin, as well as digestive disorders.

All you need to do is brew the Rooibos tea for 3-5 minutes, let it cool and then either put it next to your pet’s water bowl or stir it into your pet’s meals. A rooibos bath could also help to soothe common skin ailments that affect dogs, such as eczema. It’s also great for itchy and irritated paws, and can be used to treat eye infections as well. The actual teabags can also be placed on topical wounds to speed up the healing process.

For more about the health benefits that rooibos can offer your pet, visit www.sarooibos.co.za

Issued by Meropa Communications on behalf of the SA Rooibos Council. For further information, please contact Brigitte Taim from Meropa on 021 683 6464; 082 410 8960 or email: brigittet@meropact.co.za